Since I eat out a lot, I love it when restaurants offer something special or different.  So when we sat down at Prime 44 West, I loved the fun and unique way they serve the “bread basket”.  Brought in a cast iron skillet is Cathy Justice’s (the owner of the Greenbrier’s wife) cornbread.  On the back of the ribbon is the recipe, which you can take home.  Even though my Mom’s jalapeno cornbread that she makes in a cast iron skillet coated with bacon fat kicks this cornbread’s ass, I still liked the presentation. 😉 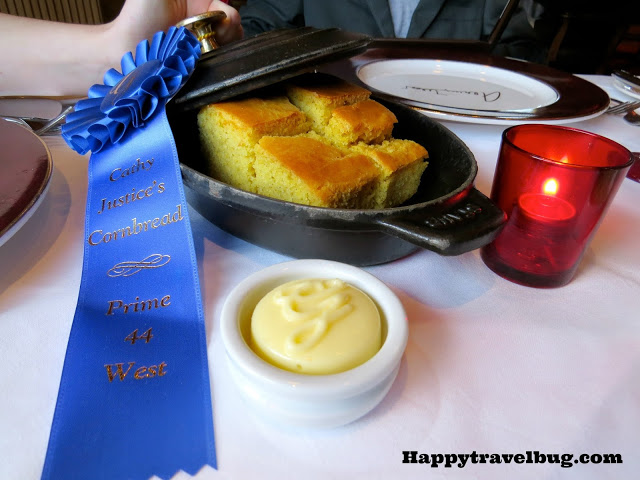 The other thing I loved was the unique menu.  Jerry West is a local basketball legend in West Virginia and he is the namesake in Prime 44 West.  44 was actually his number on his uniform.  SO, the menu was really cool because it was made out of basketball material. 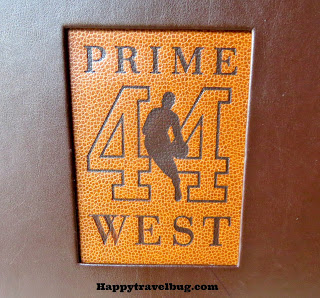 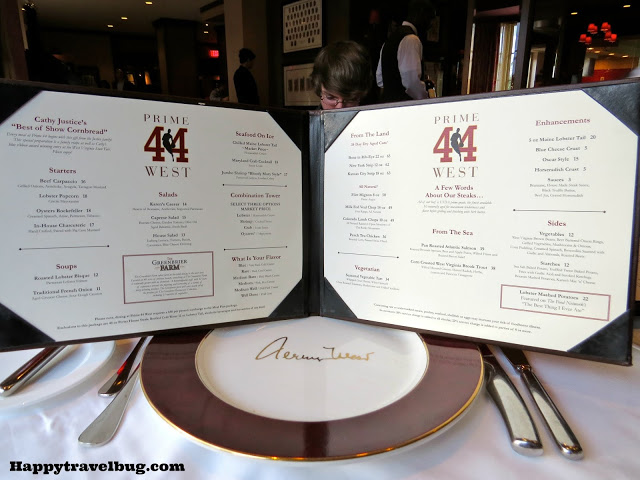 To help me peruse the menu better, I ordered up a bloody mary and my husband had a glass of wine.  It was spicy and I liked it! 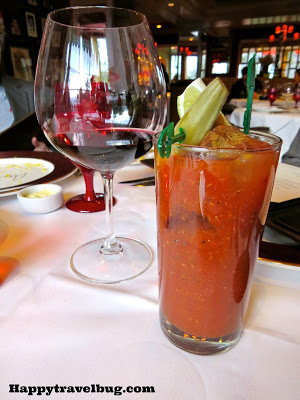 We started with the In-House Charcuterie as an appetizer.  I love trying new types of meat and cheeses, so I get this type of thing a lot.  I wish they had little cards telling what each thing is.  It isn’t listed on the menu and when we asked our waiter, he actually said, “well, I think this is some kind of salami and this here is blue cheese.”  Note to Prime 44 West: either have cards telling what kinds of meat and cheeses these are or school your servers on it. 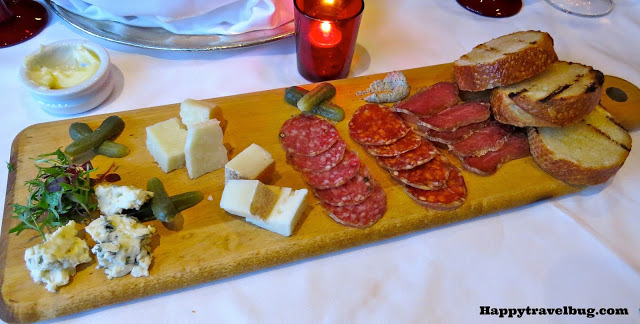 For our entrees, my husband went with the fish and the rest of us went for the filet.  This is his corn crusted West Virginia brook trout below.  He really enjoyed it!  It was served with wilted mustard greens, shaved radish and had a lemon and pancetta vinaigrette. 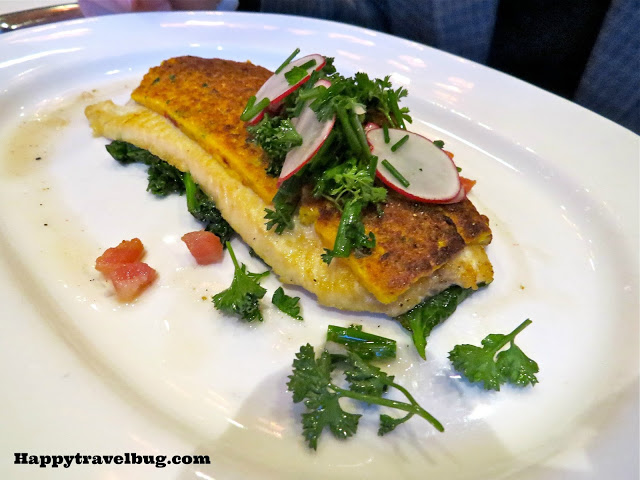 The smallest filet was 8 oz, which my son can easily handle, but I didn’t want.  So I ended up splitting my filet with my daughter.  It was the perfect amount.  We all throughly enjoyed it!  It was seasoned well and cooked perfectly.  So soft and juicy…yum!

The sides are served family style, so we ordered two for the table.  The first was roasted beets (for our healthy side) and the second was lobster mashed potatoes.  These were double the price of the other sides, but we had seen them featured on the Food Network show “The Best Thing I Ever Ate” and really wanted to try them. 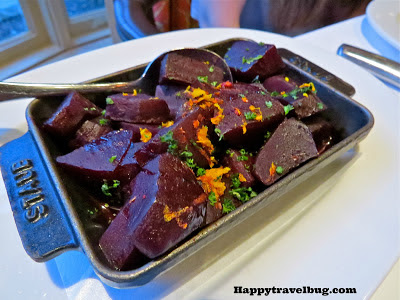 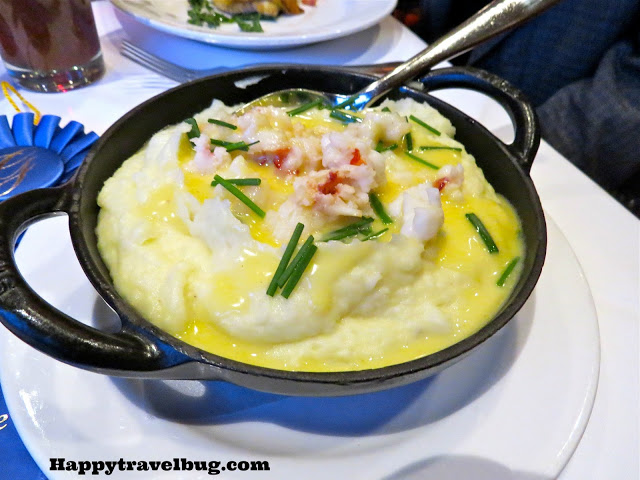 OH MY GOSH!  They were soooooooooooo worth it!  They truly were the best mashed potatoes I have ever had in my life.  Just looking at this picture now makes me so sad that I am not eating them.  Below is what my plate looked like after I split my filet and added my sides. 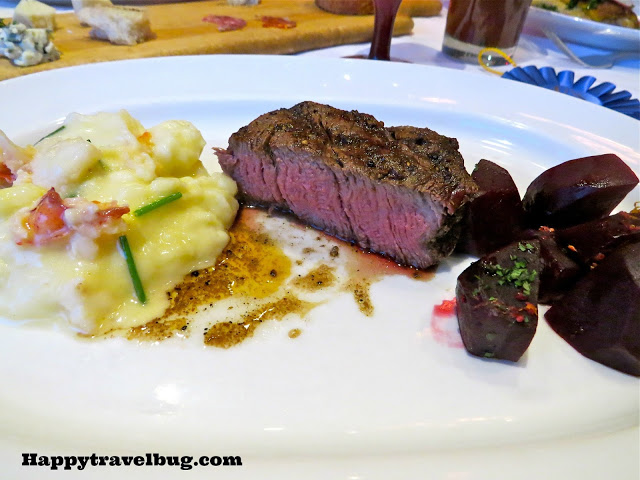 We were stuffed after the entrees and just couldn’t bring ourselves to order dessert.  But I wanted to get a picture of the after dinner drink menu and dessert menu for you guys. 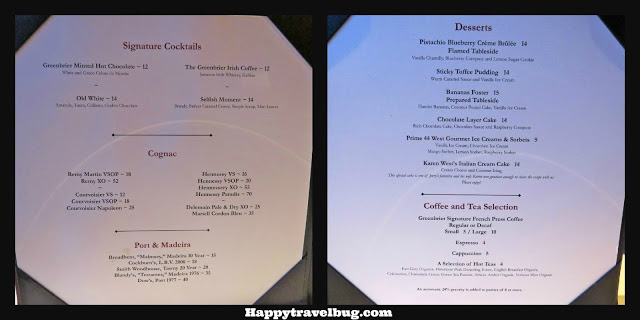 I thought Prime 44 West was good, mainly because of the filet and lobster mashed potatoes.  I much preferred The Main Dining Room at the Greenbrier for an overall experience, though.  That being said, I would go back here and just order the lobster mashed potatoes and eat the entire family style portion for my dinnner.  Yes, they were that good!

Check out what others are eating at Peasandcrayons.com & Foodie Tuesday