My son’s birthday almost always falls on Spring Break.  Therefore, we have celebrated his birthday all over the world.  Pretty cool for him!  This year we were spending Spring Break at the Greenbrier in West Virginia.  Since my son’s favorite food is pasta, I decided there was no better restaurant than The Forum.  It is an Italian restaurant located right inside the Greenbrier.  Perfect! 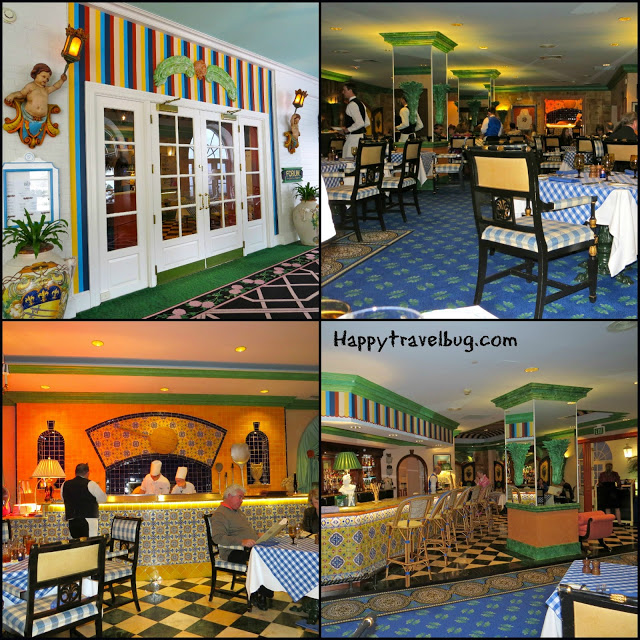 Just like everything else at The Greenbrier, it is very colorful inside.  🙂   After checking out the menu, we decided on Frito Misto for our Appetizer. 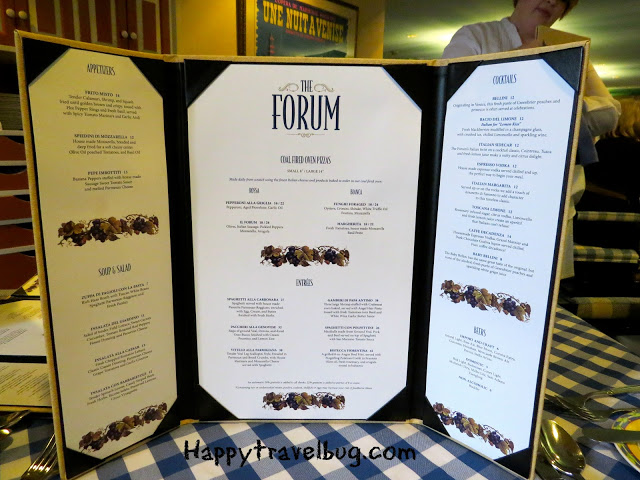 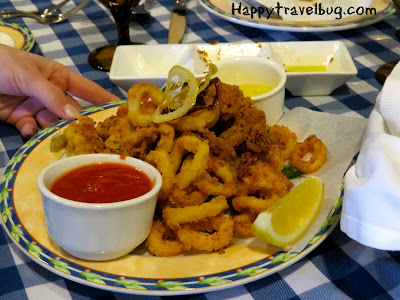 It was a delicious concoction of tender calamari, shrimp and squash, fried until golden brown and crispy and tossed with hot pepper rings and basil.  The calamari was my favorite, along with these thinly sliced lemon pieces served on top.  But the spicy tomato marinara and garlic aioli made the dish!  Oh my goodness, I don’t know which one was better.  The aioli would have kicked the marinara’s butt had it not been spicy.  But it was, so it is a hard call.  I just went from one to the other, so I could enjoy both evenly.  Along with the Frito Misto, we had the usual bread that comes with the meal and the usual salad.  Unusual, however, was what came served with the bread. 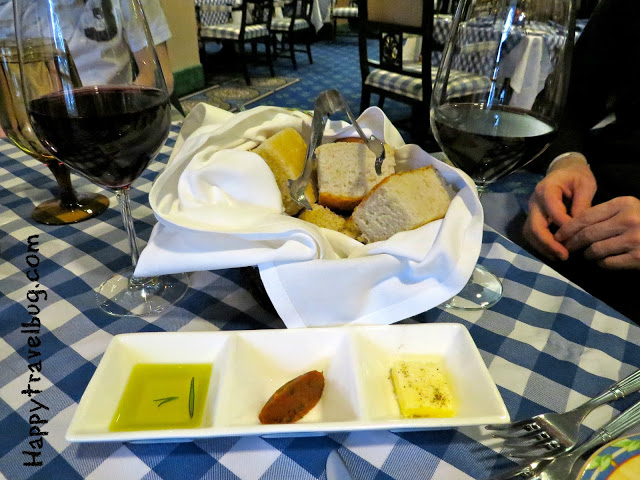 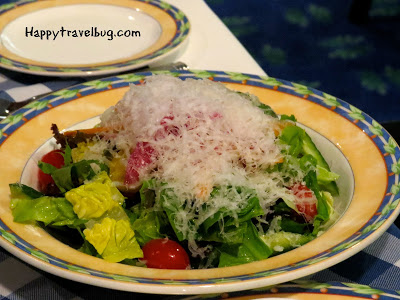 There was flavored olive oil, a tomato paste type thing and some of the yummiest butter ever.  I don’t know what they put in the butter, but it was fantastic and unfortunately, I couldn’t get enough.  I really liked this unusual addition to the bread plate.  Now that I’m filled up on calamari and bread, it’s time for the entrees!  😉 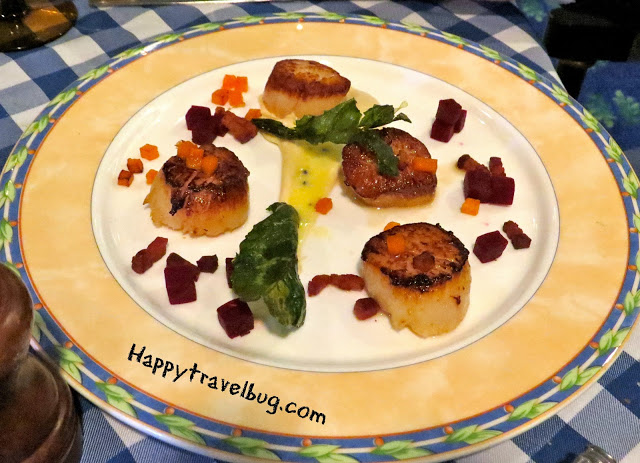 My husband ordered one of the specials of the night.  I don’t remember the name of the dish, but it is scallops with pancetta (and some other stuff)….darn it, I thought I had written it down somewhere, but I can’t find it!  The scallops were perfect!  The scallops crispy crust with a moist soft center went great with that yellow sauce.  I only had one taste, but it seems like it was lemony.  Anyway, sorry for the terrible description, but just know that it was fantastic! 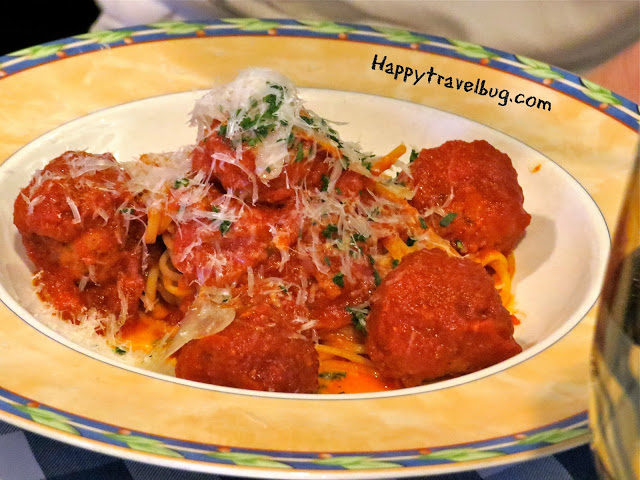 My son, being the pasta lover that he is, ordered the Spaghetti Con Polpettine: meatballs made from ground veal, pork and beef served on top of spaghetti with San Marzano Tomato Sauce.  He has had spaghetti at MANY restaurants and he really liked this one.  I tasted the sauce and also thought it was quite tasty. 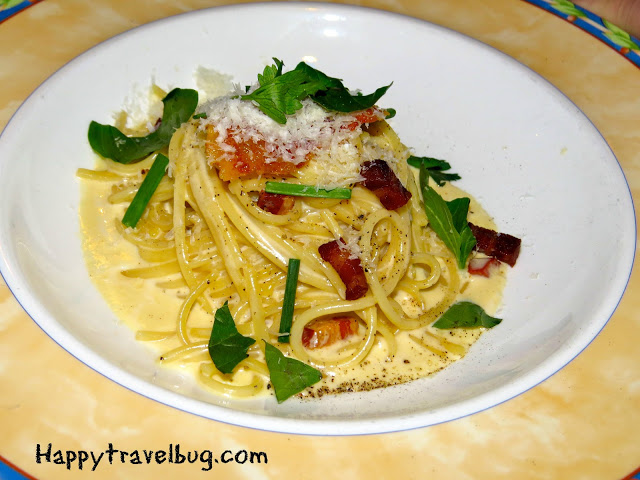 My daughter ordered the Spaghetti Alla Carbonara: spaghetti served with house made Pancetta Parmesan-Reggiano, enriched with egg, cream and butter.  This is a rich dish!  It tastes amazing, but always makes my stomach a little upset if I eat the whole thing.  To be a teenager again and be able to eat whatever I wanted.  This was one of the better Carbonara sauces that I have had.  Delish! 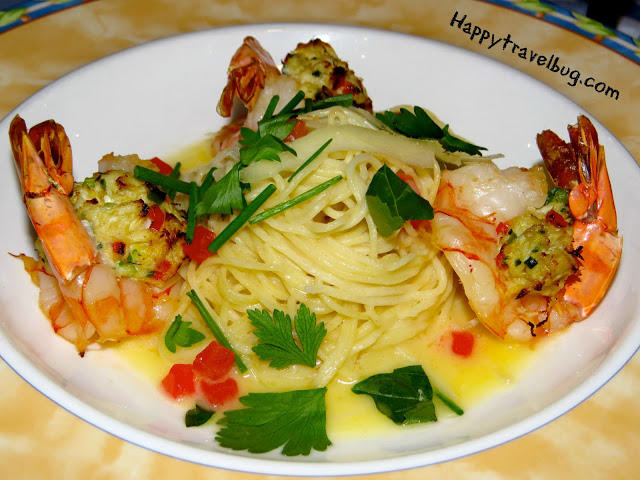 Last but not least, I had the Gamberi Di Papa Antimo: Three large shrimp stuffed with crabmeat, oven baked and then served with angel hair pasta tossed with fresh tomatoes, torn basil and white wine garlic butter sauce.  YUMMY!  I cut the shrimp up and mixed it in with the pasta.  I don’t know why I love angel hair pasta so much.  Could be the name. 🙂  The sauce was not to heavy even though it had garlic butter.  Overall, we were happy with the entrees.  Now on to dessert! 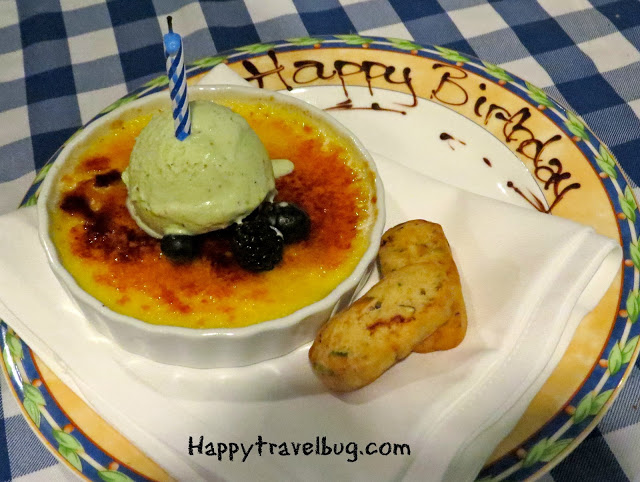 We had to get the birthday boy some dessert!  Cream brulee with berries and ice cream, served with some biscotti.  The perfect creamy ending to a great meal!  Another successful birthday celebrated.  They are going by way to fast.  🙁 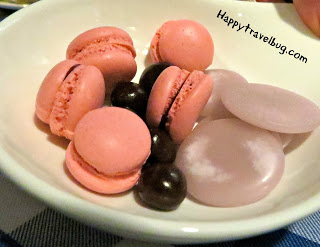 The waitress brought us this little surprise with the check.  I guess that sweetens the blow of the bill! 🙂  My daughter loved the little macaroons and I loved the chocolate.  The other things were just pure sugar and I think my husband ate them.What is the best thing you have been served in a restaurant that you didn’t order?  You were just pleasantly surprised when it arrived?


To see what others are eating, check out peasandcrayons.com