I’m an Oprah fan!  I enjoy many shows on her new network, OWN.  One of my favorites is Lifeclass, where Oprah and an expert of some kind help you with everyday life issues.  I was lucky enough to attend a taping of Lifeclass with Iyanla Vanzant on “Why Women Are Mean to Each Other”.  So imagine how happy I was to attend another Lifeclass with Dr. Phil! The topic was his new book, Life Code.  I was able to read the book before class…interesting topic of how to protect yourself from those bad people out there.  You know the ones!  Dr. Phil calls them baiters.

I invited my friend, Dara, to attend with me and we were so excited to get to Harpo Studios.  We practiced our “selfies” to post on twitter. 🙂  We were there for two tapings, which meant a pretty big time frame, so they offered us some Subway sandwiches in the holding room.  This is where you wait after you check in. 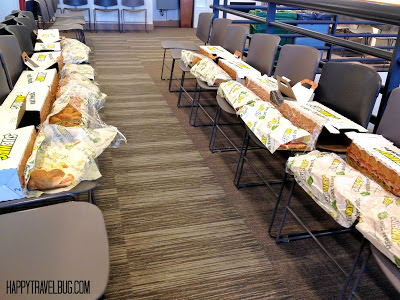 The last Lifeclass taping was held in the same studio as the Oprah Show was held.  For this Lifeclass, they built a more intimate studio.  We got to walk through a lot of Harpo to get to it.  I thought it was really cool to see new “behind the scenes” areas.

Speaking of “behind the scenes”, this next picture is literally behind the screen that you see on the show.  It shows the tweets and pins that people are posting live.  I didn’t realize you could see through it.  One of my tweets made it to this board later during taping. 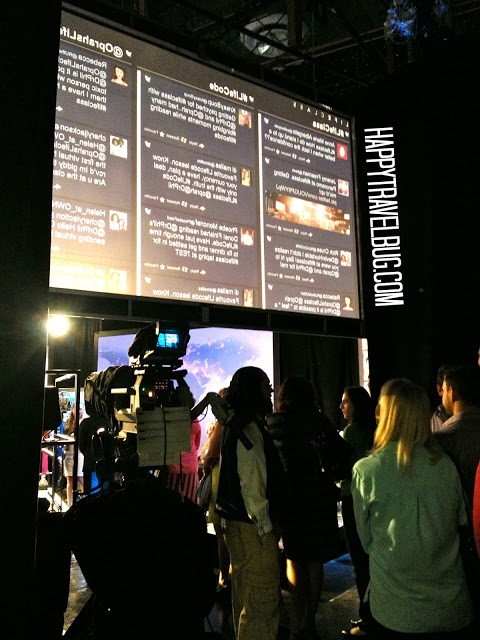 You are assigned to seats and one of the friendly staff people direct you where to go.  Dara and I had made some friends while we were in the holding room and then we were seated right next to them.  So, of course, we had to get our picture taken.  (sorry for the quality) 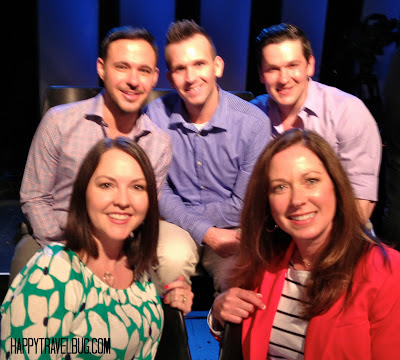 After we were seated, I got busy taking pictures for you.  These pics below show the room and everyone working before Dr. Phil and Oprah arrived.  The lady with the mike is Sally Lou.  She seems to be in charge of everything that happens before the show gets started.  She is full of energy! 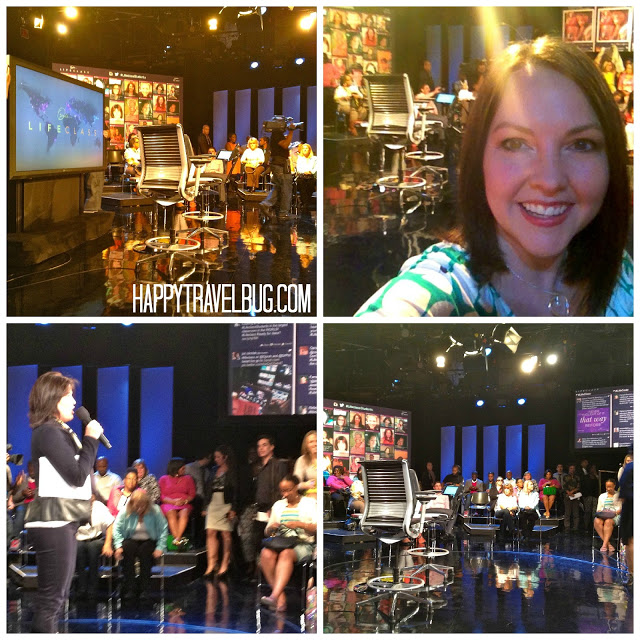 I managed to snap a few shots of the stars of the evening! 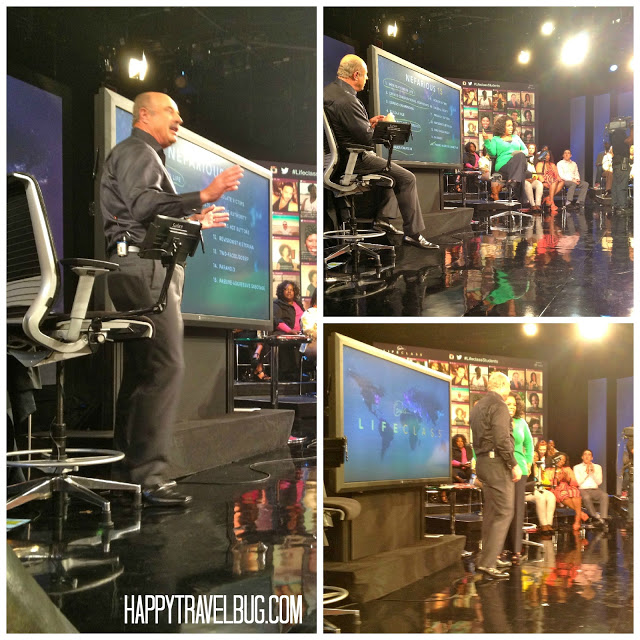 Attending a double taping was a new experience for me.  After the first taping, the audience team (Sally Lou and company) moved people all around so the audience would look different for the second show. Dara and I were moved from one side of the room to the other.  Both times we were on the front row, which was awesome!  This time I ended up sitting next to Katherine Cunningham, who is an actress on the show Chicago Fire.  She was super sweet and lovely.  (That’s her in the picture below) 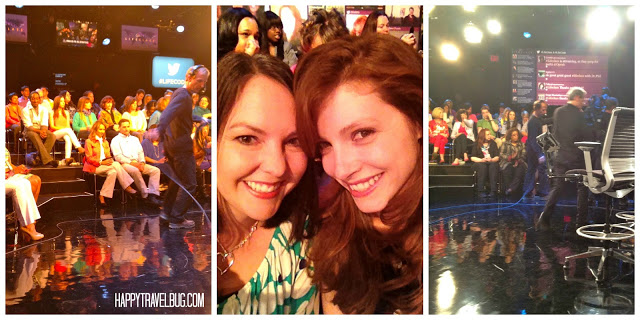 I love the color combination of pink and green.  In fact, I decorated my daughter’s baby room that way. Oprah must love them as well, because she started the night in a green shirt and came out for the second show in a pink one.  I really liked the pink one on her. 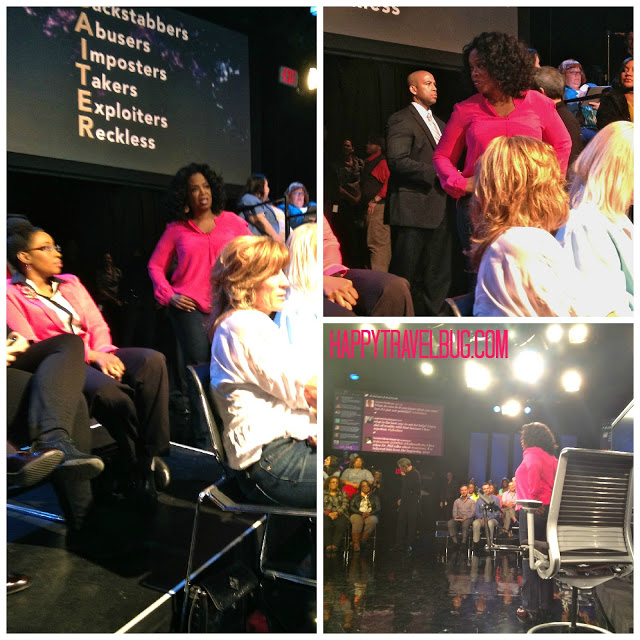 Remember when I said my tweet made it to the screen during taping?  Well, I’ve circled it below.  That is my twitter name @happyhoyt.  I was hoping Oprah would ask my question to Dr. Phil, but she didn’t. 🙁

If you are an Oprah fan, you might remember when they tricked those ladies and drove them right up on the stage during an Oprah Show?  Well, we left Harpo Studio out of that door.  Again, I really enjoyed seeing new parts of Harpo Studios.  Made the experience even more special. 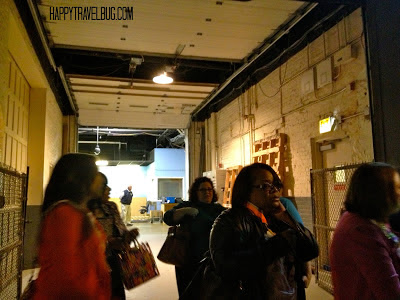 After we left the building, we took a lot of pictures of the signs and such.  Even though I have been to Harpo three times, I have never taken pictures of the outside.  I made up for it this time.  We spent lots of time snapping pics of everything. 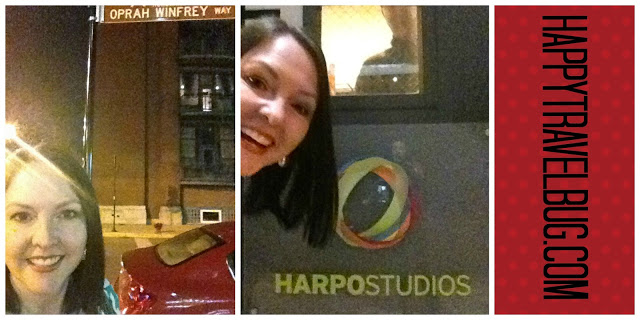 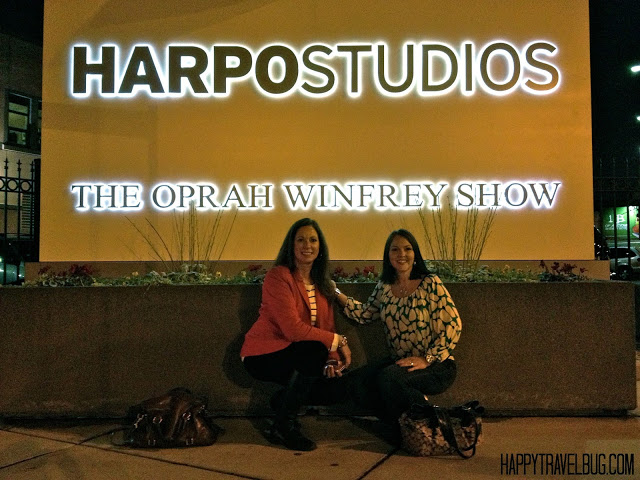 As usual, I was interested in the topic of Lifeclass, but you can watch that on OWN and hear all of Dr. Phil’s wisdom and Oprah’s great thoughts.  I just wanted to share what the experience is like to attend a taping.  We had a great time!
Check out what other travelers are doing on Travel Photo Thursday, Travel Photo Monday, Mosaic Monday and Friday Daydreamin!