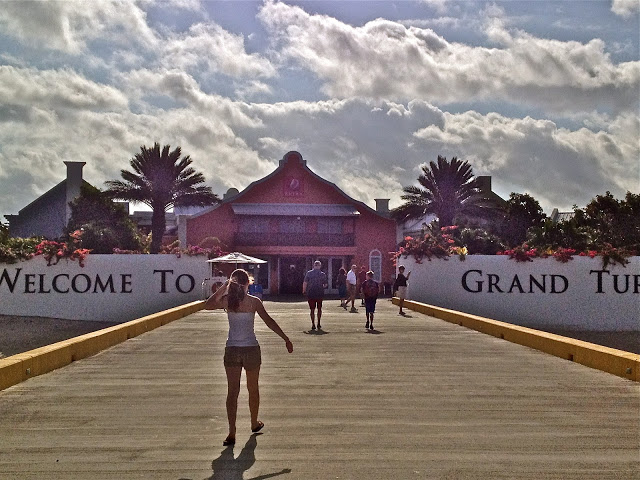 Grand Turk, part of the Turks & Caicos Islands, was our first stop after boarding the ship in Fort Lauderdale, Florida.  I had never been on a Caribbean Cruise before, only an Alaskan and Mediterranean Cruise.  I am used to stopping at towns where people actually live or historic areas with tons of things to see and do.  I am not used to stopping at a Cruise Center that is built just for tourists.  But you know what, I could get used to it!  Especially if the point of my vacation was relaxation.  Off the ship and onto the beach in a matter of minutes.  Easy peasy! 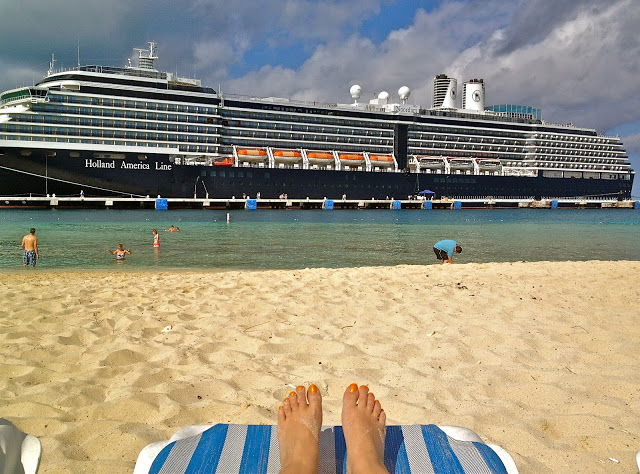 There were excursions available for this port.  Things like deep sea fishing, dune buggy safari and horseback riding. You could also go to town or golf, but I heard negative feedback about both of those experiences. We were there from 7am till 1pm and I thought that was the perfect time to spend at the beach. 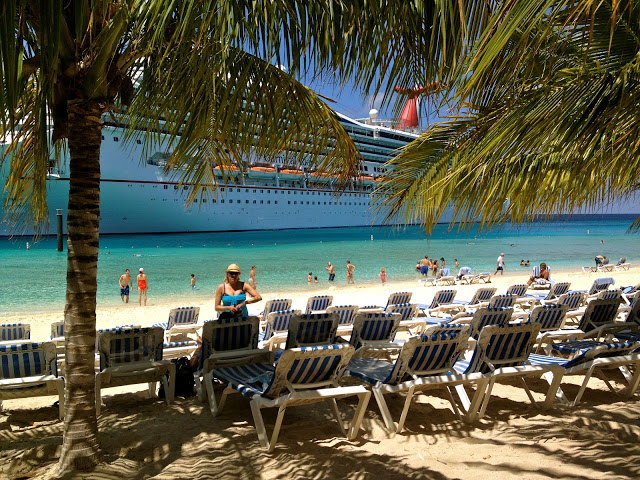 You couldn’t ask for a better FREE excursion.  The beach is ready and waiting, right off the ship with free lounge chairs.  My family took our snorkeling gear I had brought from home and found some really interesting things under the water. We found the little crab (below) and quickly put him back after snapping the picture. Toward the edge of the roped off swimming area it got really deep and the kids thought snorkeling in that area was awesome.  I was a little scared. 😉  Grand Turk is the perfect port to just kick back and relax. 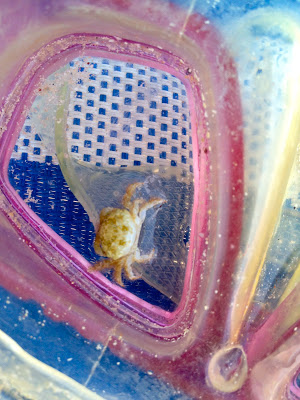 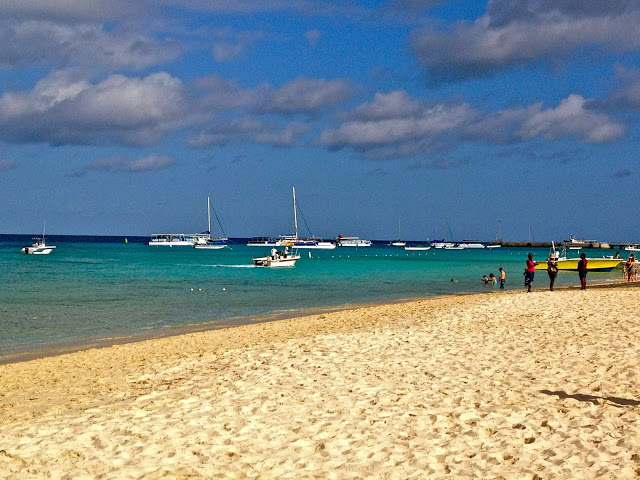 Our ship was the only one there all morning.  Then around noon a Carnival ship started to make its way into port.  It was really cool to see it coming in right there in front of us.  It was even more interesting because it had to turn around and try again.  Don’t really know why, maybe it was a new driver. I have one of those in my house, so I totally understand needing a do-over. 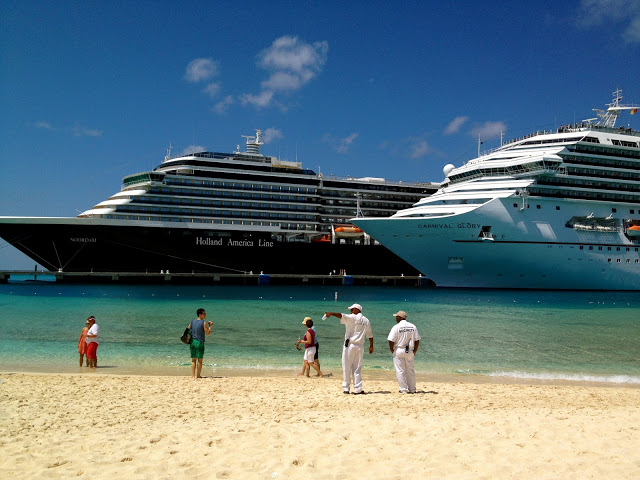 They made us get out of the water for the ship to come in.  We knew there would be tons of people getting off the ship and heading to the beach, so we decided to pack up and explore the cruise center before heading back for lunch.  I loved the hanging “egg” chairs at Jimmy Buffet’s Margaritaville.  My daughter wanted one for her room. 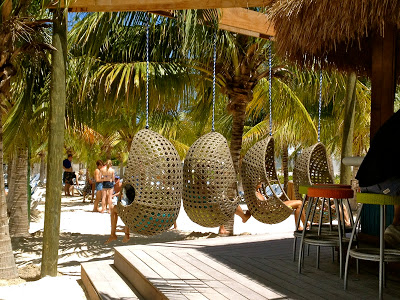 While one side of the pier has soft sand to play in, the other side is very rocky.  It makes for some pretty pictures though.  Also, there is a small Nasa exhibit because in 1962, the splashdown of the Mercury capsule piloted by astronaut John Glenn occurred just a few miles off the coast of the island. 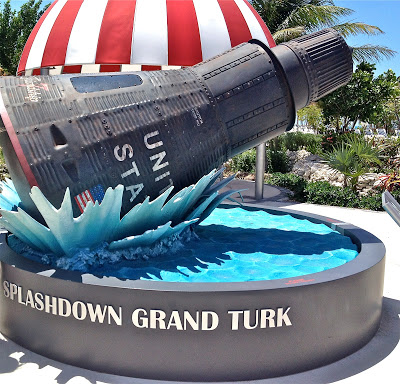 Not sure what the deal is with the whale, but I couldn’t resist taking a picture. 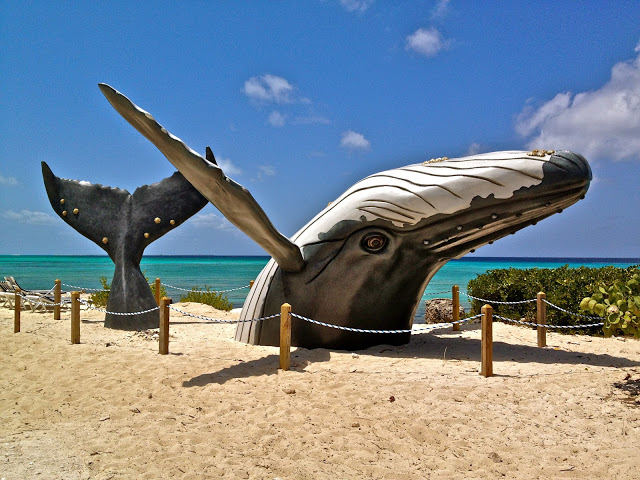 We knew when the Carnival ship arrived it would bring lots of people…and boy did it! 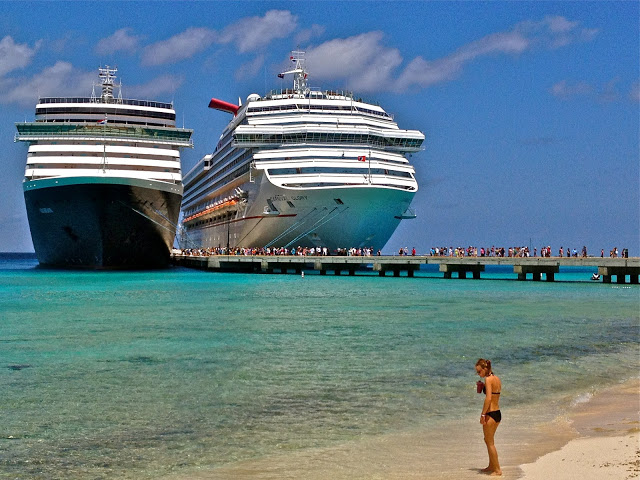 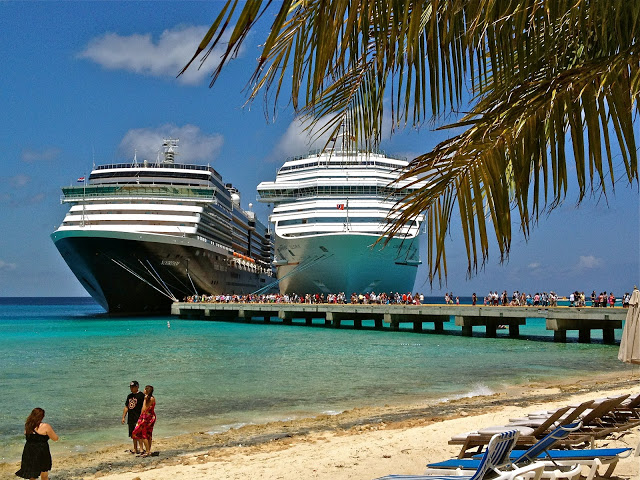 We had just enough time for some cute family photos, some shopping for a collector spoon and back on the ship we went. 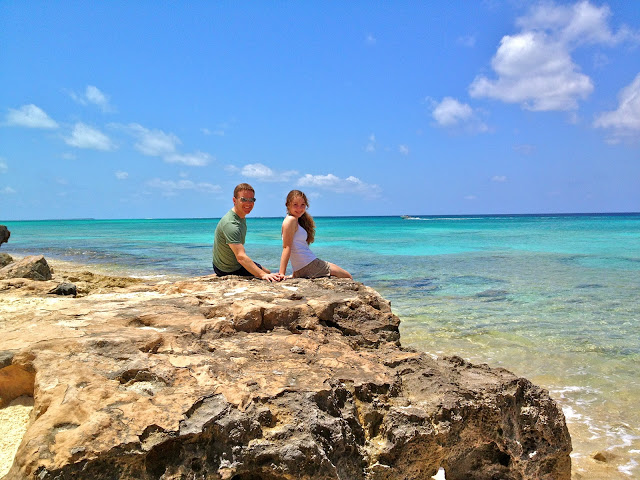 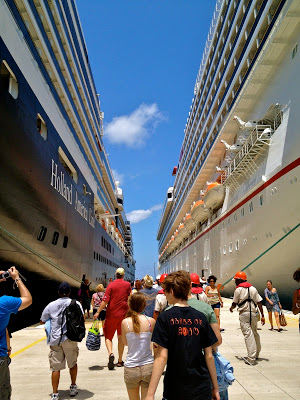 I would say Grand Turk is a great cruise stop if you are just wanting to relax on the beach.  It really couldn’t have been more relaxing and easy.  I’m including a map of the cruise center with all its shops, places to eat and hang out.  Click on it to enlarge. 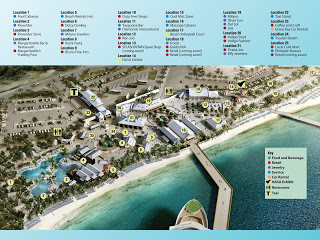 Have you ever been to Grand Turk?  What excursions did you do while you were there?
Check out where other travel writers are dreaming about at
Friday Daydreamin’ with RWeThereYetMom? and  Budget Travelers Sandbox and Delicious Baby.