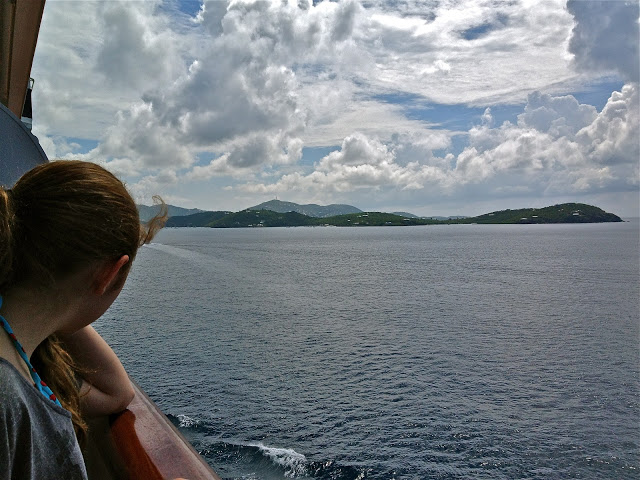 This is one of the best reasons for having a room with a balcony!  As you approach each island, you have an amazing private viewing area. 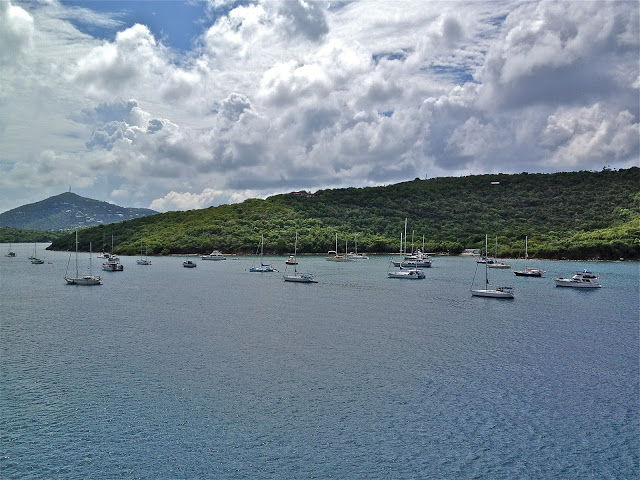 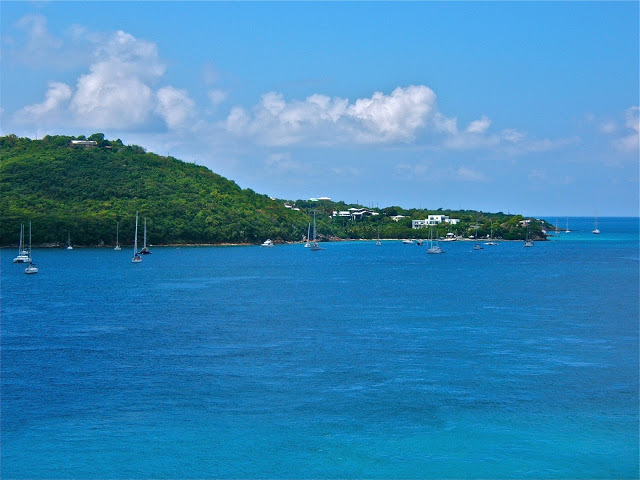 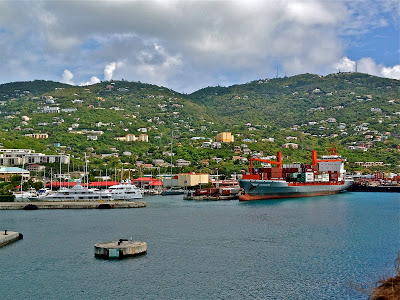 If you travel a lot, one thing you know for sure, is that plans can change.  Even though we had a great time on the beach in Grand Turk, we were supposed to be on an excursion called Gibb’s Cay Stingray Encounter and Beach.  I LOVE to snorkel and had done tons of research for the best snorkeling experience.  I picked Gibb’s Cay because no one in my family had ever swam with stingrays, and while we were a little scared, we decided to face that fear and go for it!  Unfortunately, that excursion was cancelled the day we arrived on the ship.  Being that I am an over the top trip planner, this annoyed me, but all that planning payed off because I knew all the other options available.  So I quickly booked another snorkel experience for St. Thomas called Castaway Ship Wreck Cove Sail and Snorkel.  We had planned to take a taxi to Coki Beach and Coral World Ocean Park, but I decided we couldn’t come to the Caribbean and not snorkel.  Problem averted…kind of. 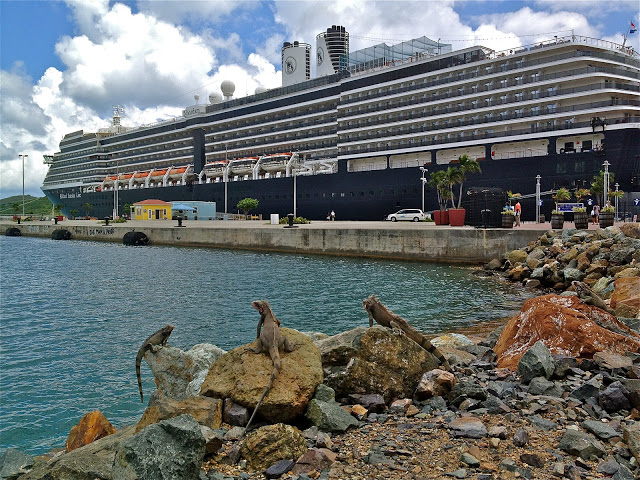 We arrived to some very curious onlookers. There were lots of them sunning on the rocks.  I think I discovered which one was in charge in this video below.
Here is a picture of the grumpy leader that I thought looked like a painting. 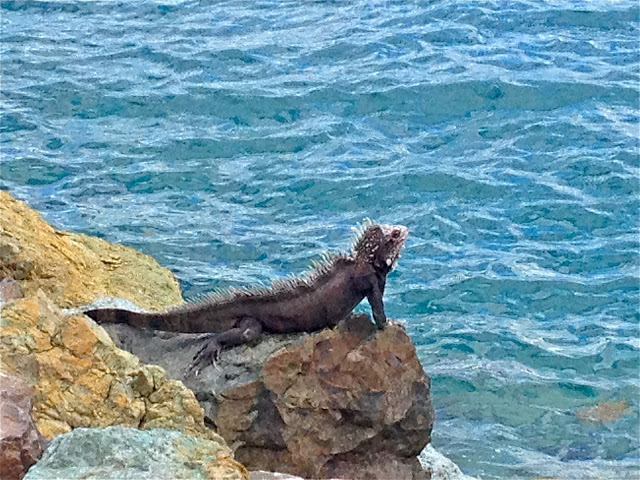 This port also had a little area just off the ship with some shops and a place to catch a taxi, but it was much smaller than Grand Turk’s cruise center.  Most people left the area for an excursion.  We only had to walk from the ship to the catamaran and off we went. 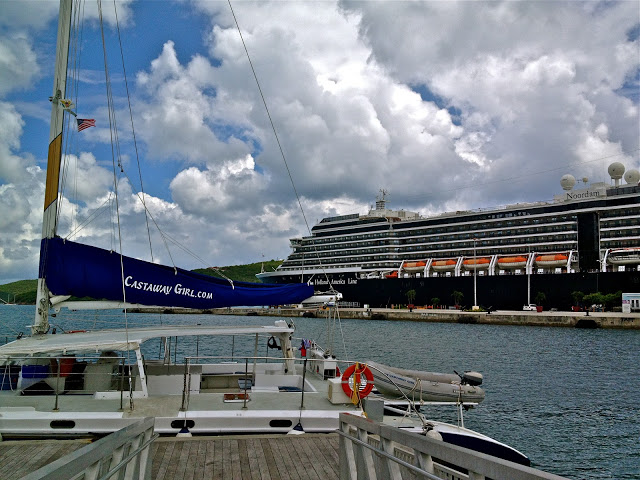 You can see it was cloudy, but with blue skies, and we were hoping it would stay that way.  No such luck.  As we arrived at our snorkeling spot, the rain clouds started moving in.  I am a fan of storms and interesting weather, so I still thought it looked beautiful. 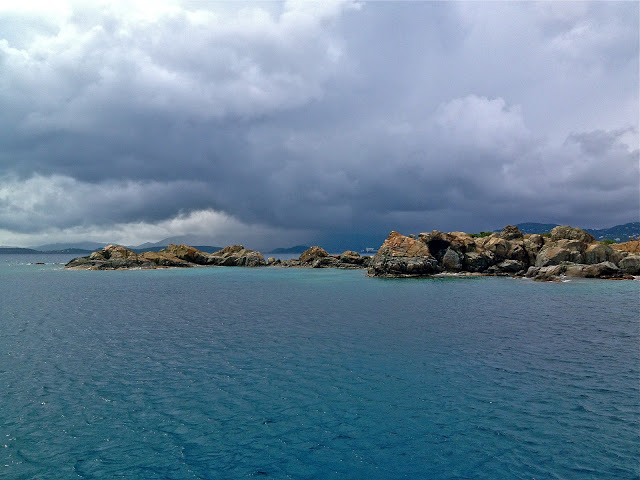 We were still able to get our snorkeling in.  I took pictures with an underwater camera and now I can’t find them anywhere.  I’ll keep looking, but in the meantime, I’ll just have to tell you about the experience.  I prefer shallow water snorkeling with coral, which is why I didn’t pick this excursion originally.  The water was very deep, but there was a ship wreck under us, which was cool.  But it was way to far down for the normal person to swim to.  One of our guides swam to it and scared the mother in me when she disappeared into the ship and came out another place.  It was very “Little Mermaid”ish and I would have loved to be able to do something like that.  But I had to settle for regular snorkeling.  On a snorkeling scale of one to five fishes, I would give this one a two.  Unlike the Bermuda snorkeling excursion that I would give a four.  I’m still waiting for a five, but I will have that perfect snorkeling experience because I’m determined!  After the snorkeling was over, we loaded back on the catamaran and started drinking the complimentary rum punch.  Some people got a little nutty when they started playing dance music.  It was entertaining. 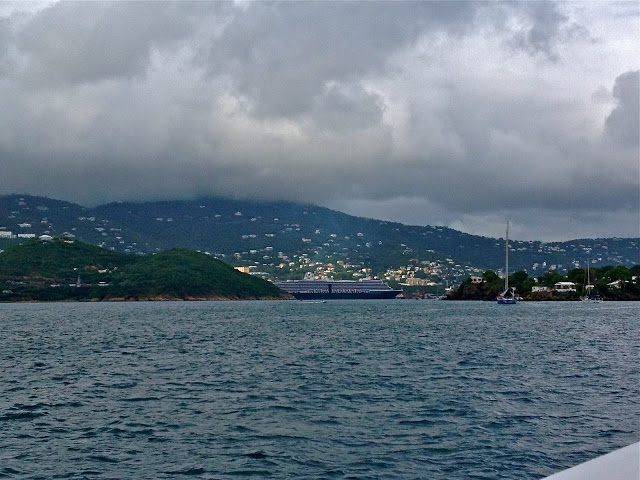 The next part of the trip came as a fun surprise.  It started to rain…A LOT!  Pretty much everyone on the catamaran tried to fit under the covered area, but not me.  I had the best time sitting out on the net in the rain.  I can’t really explain why I enjoyed it so much.  I think it was because I felt like a part of nature, almost as if I was a fish.  Okay, that sounds weird, like I said, it is hard to explain.  But I loved it!  The rain was just pounding down on me because the crew was trying to get back ASAP.  And there I sat, with a big grin on my face.  Very unexpected ending to our excursion that I think was my favorite part. 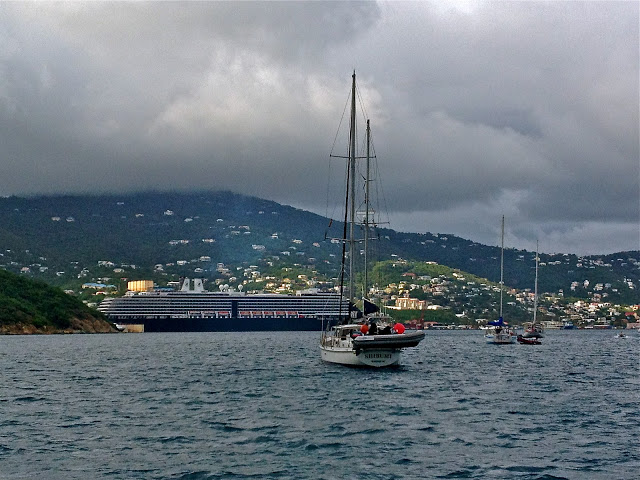 As we got back on the ship and said good bye to St. Thomas, I had to smile at myself and wonder if I was the only person leaving who was glad the blue skies went away while we were there.  🙂
Day dream about other places on Friday Daydreamin’  , Travel Photo Thursday and Travel Tips Tuesday