I have tried lots of different ethnic foods: Mexican, Chinese, Italian, Thai, Indian, Spanish, German…the list goes on and on…but one thing I had never tried is African food.  That is why I was so excited to try the Boma buffet at the Animal Kingdom Lodge in Disney World.  I figured there would be lots of new things to experience. 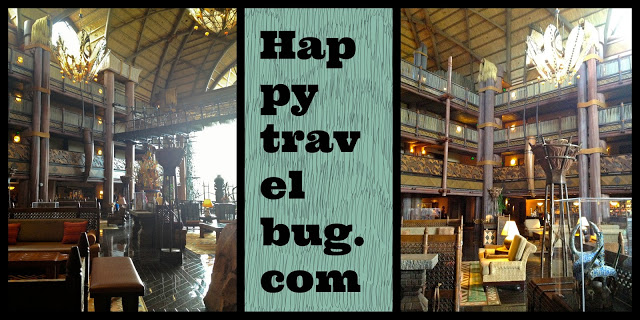 As I said, Boma is located in the Animal Kingdom Lodge.  I have never stayed there before, but would love to.  Especially now that I have seen it.  Would have to have one of the rooms that looked out over the animals!  Anyone ever done that before? 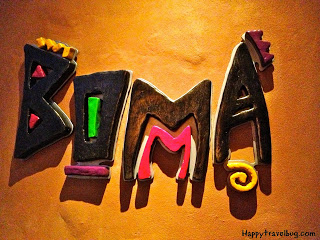 Now on to Boma!  The very colorful name went with the decor, the food and the outfits the employees were wearing.  That’s me, below, with one of the hosts. 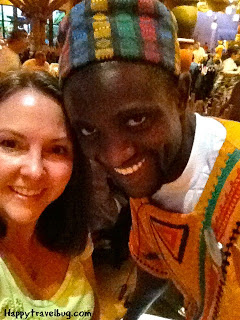 I started off with a glass of African wine.  The arrow shows you which one I ordered, the Jardin Merlot.  I really enjoyed it…both glasses! 🙂 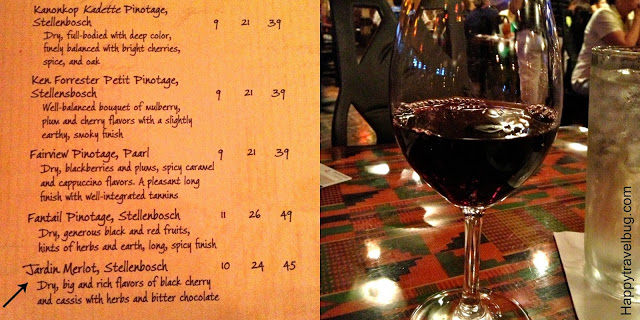 Then it was time to explore the buffet. 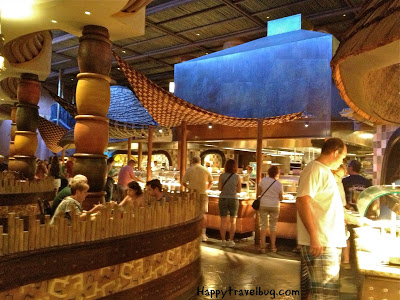 I took this video of everything the buffet offered the night we were there.  I think they change it up a little based on what I read on their website.  But I explain everything in the video.

Since this is not an inexpensive buffet, I felt the need to eat A LOT!  Do not judge my many plates of food.  I tried to get my kids to fill up as well, since they are considered adults when it comes to the price.  My daughter definitely did not get her $40 worth!  Oh well, I tried to make up for it!  🙂 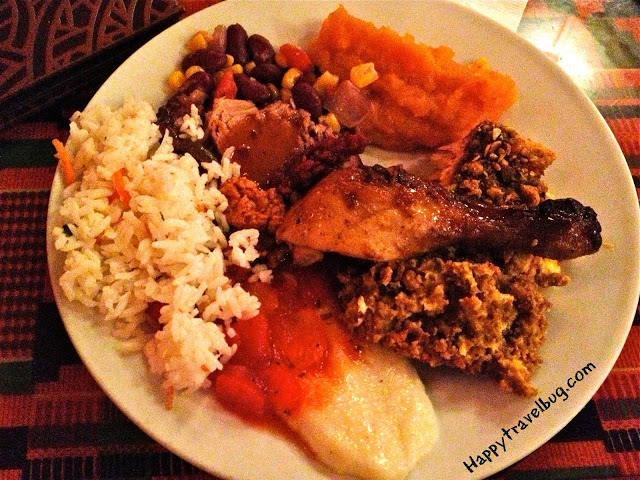 Plate #1
This plate contained my favorite thing: the Durban spiced chicken.  I don’t know what that is, but it was delicious!  I also had (from the top) the African spiced beef, beans, fufu (the orange stuff), nut crusted salmon (a little dry), bobotie, pap, chakalaka and rice.  The pap tasted just like grits and the bobotie was ground beef and eggs and quite tasty. 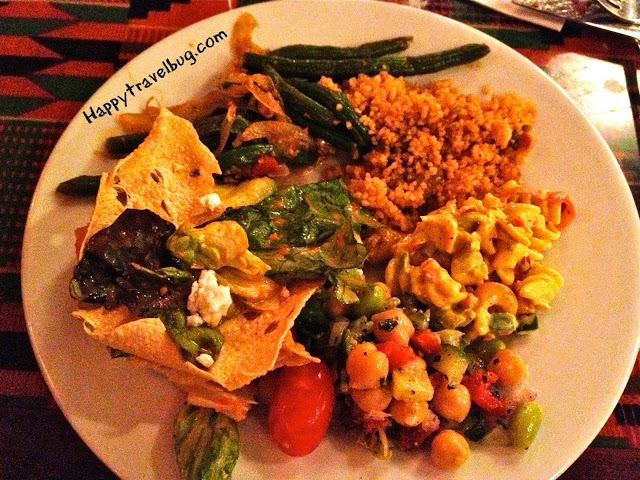 Plate #2
My favorite thing on this plate was the curried pasta salad.  I do love curry!  Next to that was the chickpea & edamame salad, Ghana tomato salad with crackers, feisty green beans and couscous with dried fruits and nuts. 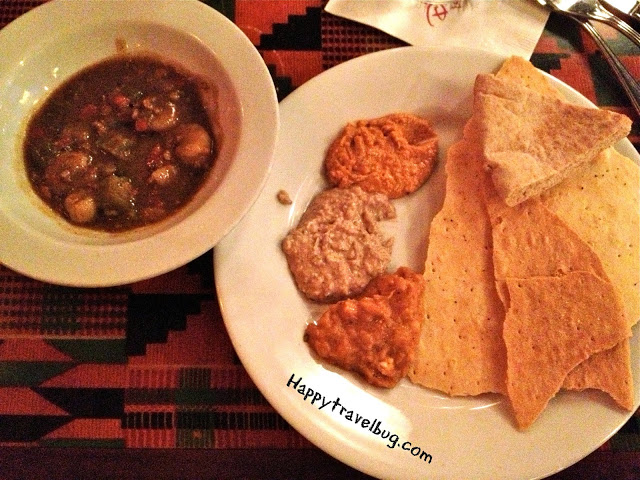 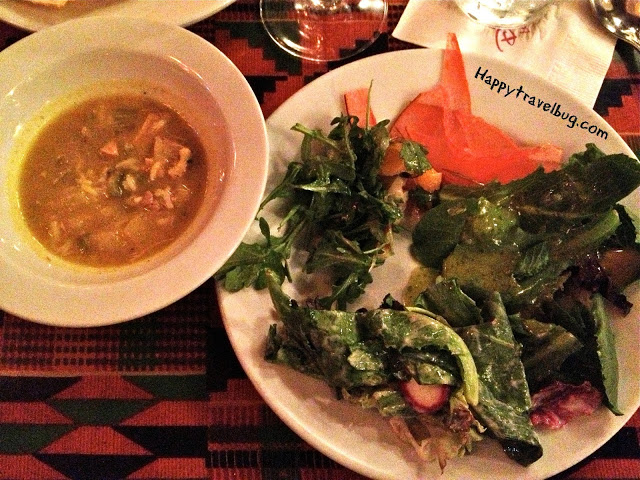 Plate #4
This soup was the best!  It was called mulligatawny and was an indian style soup with apples, rice and chicken.  YUM!  Along with that was my plate of many salads.  The colorful one at the top is a watermelon rind salad.  Interesting to try, not going back for more (very tart/bitter).  I was also having the apple & jicama salad along with the orange, olive and fennel salad.  They had several fun dressings to try as well, including mango, apple and chili cilantro vinaigrette. 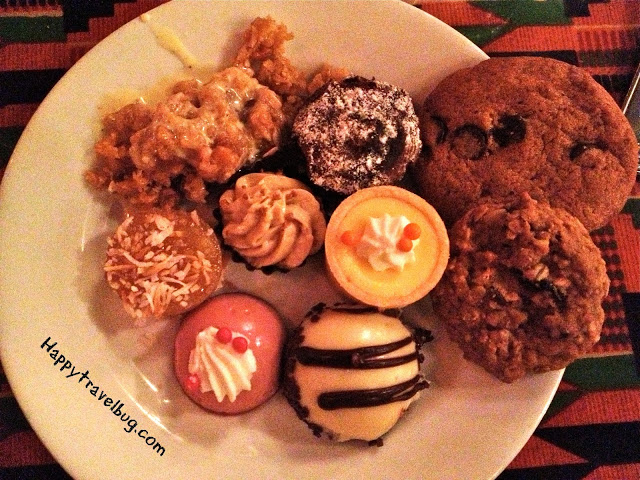 Plate #5
Of course I had to have dessert!  By far, the best thing was right there in the middle…the Kenyan coffee tart in the little chocolate shell.  I went back for more of that!  Then starting above that we have the fruit cobbler with vanilla sauce, a brownie bite, cookies, cheesecake, a zebra dome, strawberry mint panna cotta and a cassava cake.  The cookies were really yummy and the rest was good to okay.  But I enjoyed trying each and every one of them! 🙂

I did really enjoy this buffet, although I feel it cost a little much for the kids. But we were at Disney World, not a place known for super low prices!  I would like to try Jiko-the cooking place, next time I am at Disney.  It is also an African restaurant at Animal Kingdom Lodge.  But it is sit down menu stuff.  Overall, I felt like I got to try some new things, which made me happy.  Personally, I could have done without any Americanized things on the buffet and make it 100% African.  But I know lots of people don’t like to be that adventurous with their food.  What is your favorite ethnic food?  Ever tried African?

See what others are eating at InsideJourneys.com,  Peasandcrayons.com and Wanderfood Wednesday