If you look like a lobster from too much sun or just want a fun family afternoon activity the Bermuda Zoo and Aquarium is a great thing to do!

Don’t try to compare it to a big zoo like St. Louis.  Bermuda is a tiny island and compared to a big zoo there isn’t much to see. But if you take it for what it is, the Bermuda zoo and aquarium, then you will enjoy it.  Our favorite part was the aquarium. Lots of interesting things to watch and see.

While I was watching the giant lobsters one of them attacked the other.  I tried to get a little video of it, but you know how that goes, they never do it as good once you turn on the camera.  But here is a little clip of them in action.

After checking out the aquarium we headed out the door to the Bermuda sized zoo.  Here is a facility map if you want to see the layout.  We saw monkeys, seals and lots of colorful birds. 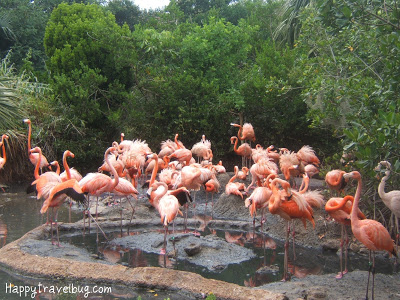 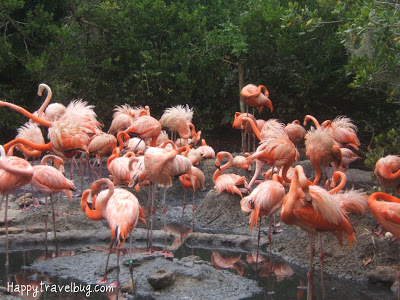 There was an area where you could touch some of the little sea creatures and that was my favorite part.  I was the only one who would pick up the sea cucumber and look at it’s belly.   It was really slimy and slippery.  My husband says he didn’t pick it up because he didn’t want to have to take off his watch.  Sure, honey! 🙂

After all the animal watching we wanted a little snack.  There is a VERY casual place to grab some food here called The Peacock’s Pantry.  It is well named.  While we were eating a peacock kept walking through and eating what people had dropped on the ground.  Fun! (update: it’s now called Buzz Beastro)

I would also like to point out that while most things in Bermuda are expensive, I did not think this activity was.  At $10 for adults and $5 for children 5-12, it made a great day’s activity.  If you are interested in the history or want more information on the Bermuda zoo and aquarium click here.