Did you start singing “Be our guest, be our guest, put our service to the test?”  I’m sure I’ll be singing it the entire time I write this post! 🙂 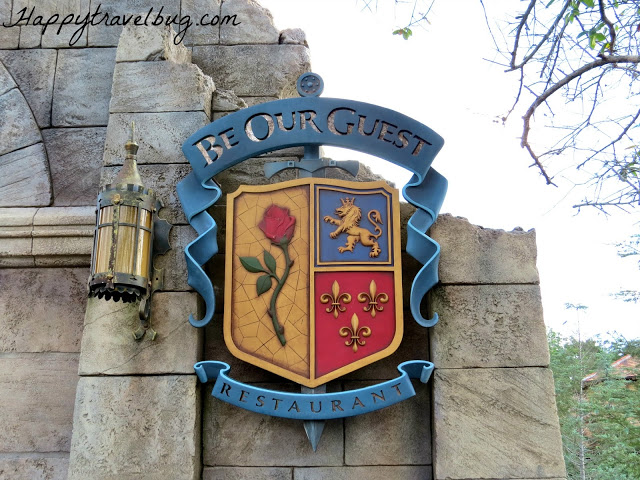 As soon as I made my Disney reservations, I knew I wanted to try this restaurant located in the Magic Kingdom.  Why?  Because it’s new!  I LOVE trying new things!   Apparently, everyone felt the same way, because I couldn’t get dinner reservations there for any night of my trip. 🙁 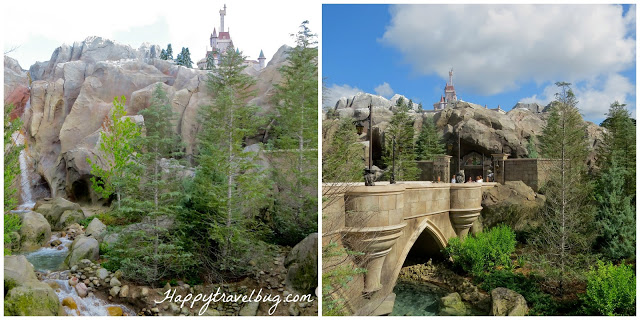 Luckily, they also serve lunch at Be Our Guest.  However, they do not take reservations.  It is first come, first serve.  I heard the lines can get quite long, but I decided to go for it.  We showed up before they opened and were the third family in line.  We just sat and played on our iphones until time to eat.  It wasn’t bad, especially when you are waiting outside a castle with waterfalls and birds singing.  🙂 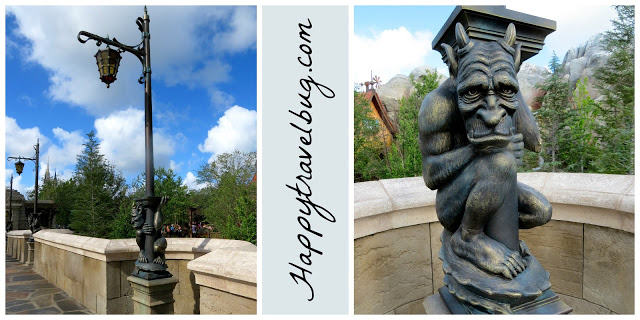 I actually made the kids hold our place in line while I took pics of all the great Disney details.  Loved these light posts on the bridge entrance.  I took a little Instagram movie of these while I was there.  (follow me @happyhoyt) 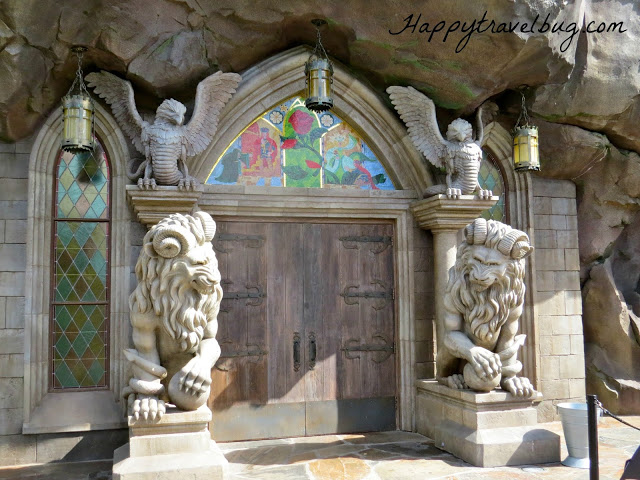 You enter the restaurant through these awesome castle looking doors!  Give me a yellow dress and I would have felt like Belle herself! 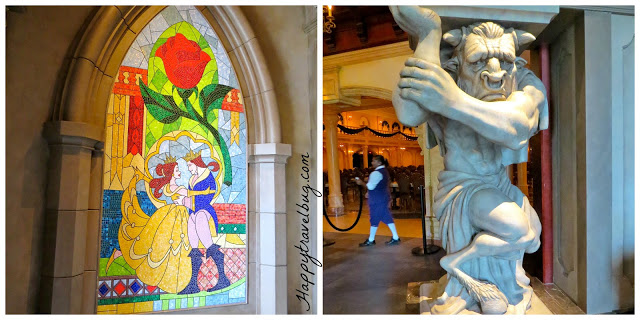 Not only the outside, but the inside reminds you of being in a castle.  For lunch you stand in line below before you place your order. 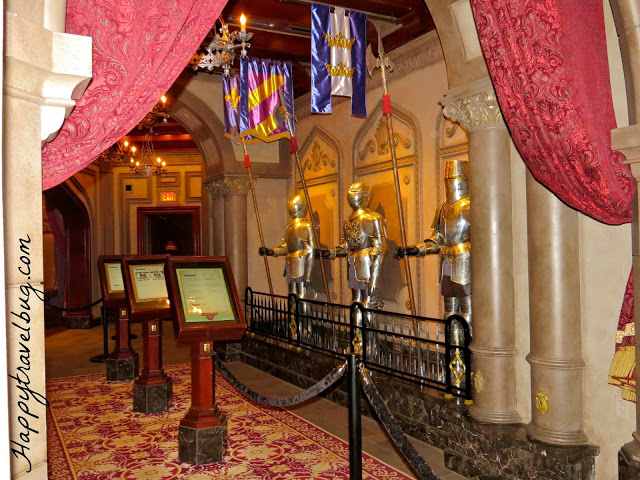 While dinner at Be Our Guest is sit down and order from a menu, lunch is a little different.  You order at these computer screen things (which I show in the video below).  They give you a “magic rose” that knows what you ordered and you take it with you to sit where ever you want.  I was shocked when a server brought our food right to us.   I said to the kids, “how did they know where we were sitting?” and my son said, “Mom, the rose!”  It lets them know where you are and what you ordered.  Pretty cool! 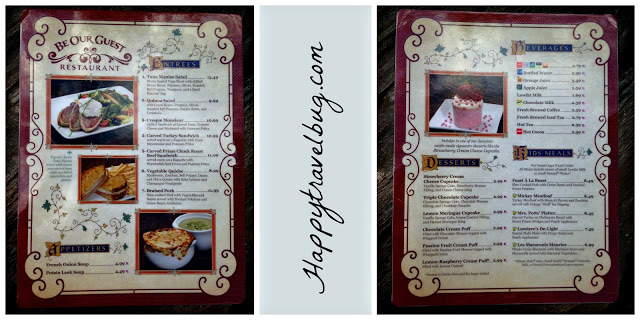 Remember, Beauty and the Beast takes place in France, so the menu is French inspired.  I had heard they had amazing cupcakes, but nothing about the food, so I was excited to try it. 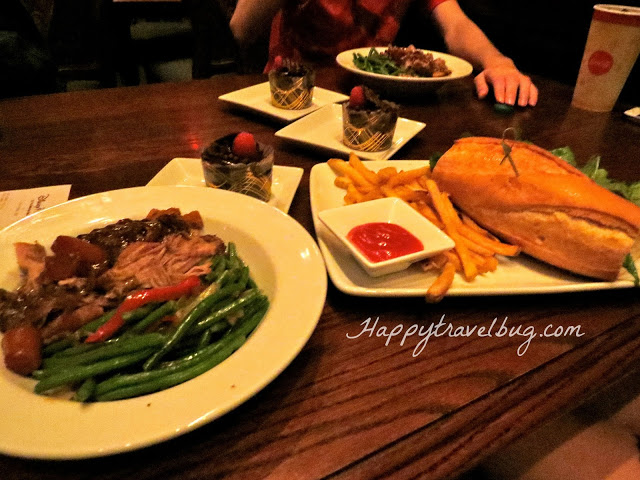 Oh my goodness, soooo delicious!  My daughter had the turkey sandwich with fries…and it was good.  But the show stopper was what my son and I both had. 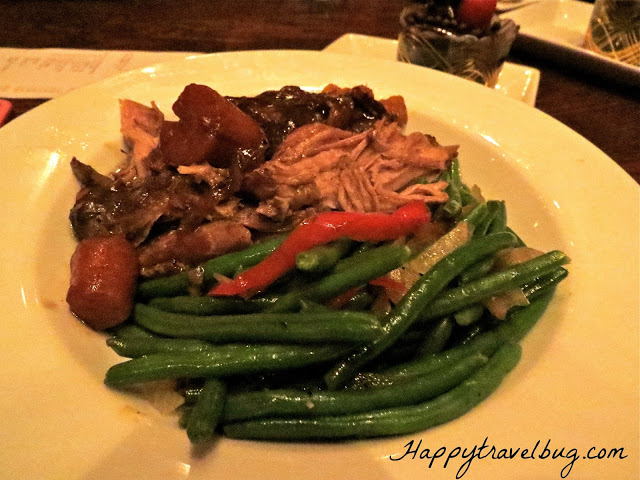 Slow-cooked pork with vegetables and bacon, served with green beans and mashed potatoes (which are hiding under the pork).  I grew up in the south with a Mom that can throw down in the kitchen and this tasted like something she made.  Fantastic comfort food that was cooked well, seasoned well and served at the right temperature.  I was happy!  So was my son! 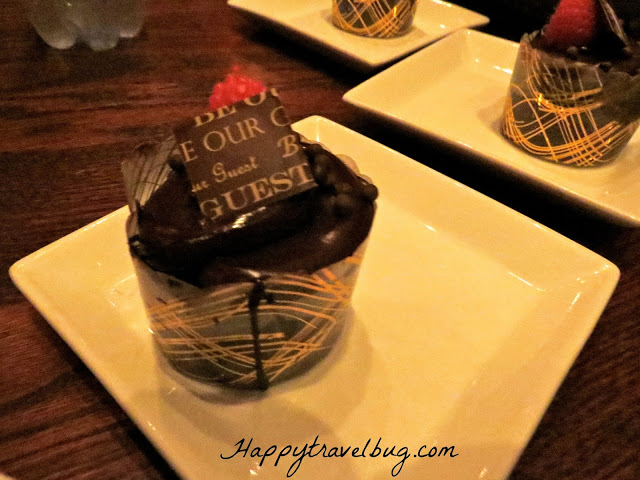 Like I said, I had heard great things about the cupcakes, so we had to try them.  I was hoping we could all get different ones and share, but no one was willing to not get the triple chocolate.  We love our chocolate in this family! The triple was chocolate cake, chocolate mousse and chocolate ganache.  I’d eat most anything with that combo!   We devoured every bite!  I wish I had ordered another one because they were only $2.99!  That is less than the cupcakes cost at the cupcake store in my town.  Way to go, Disney! 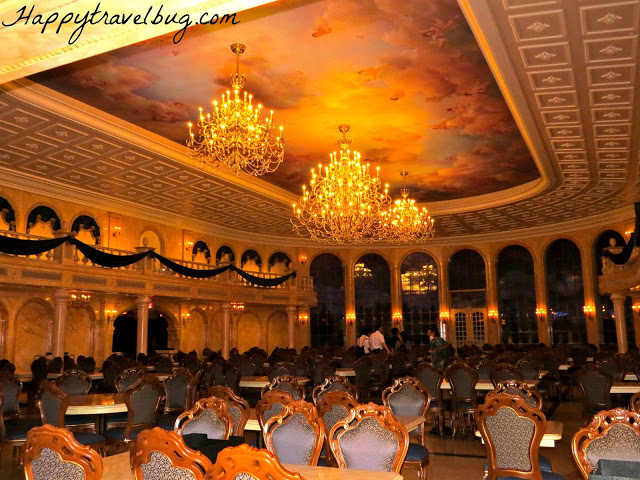 The other cool thing about eating at Be Our Guest is the selection of dining rooms.  There are three total and this one above is the Ballroom.  If you sit by the back windows it looks like it is snowing outside.  That would be the location to run to in this room. 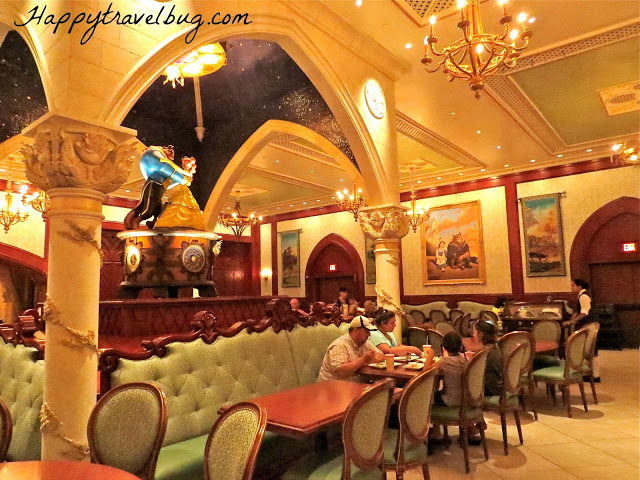 I thought this was called the East Wing, but according to their website, this is Belle’s library.  It seemed to be the least popular of the three rooms.  But it was the most peaceful if you like that sort of thing.  All the seats seem to be equal in status in this room. 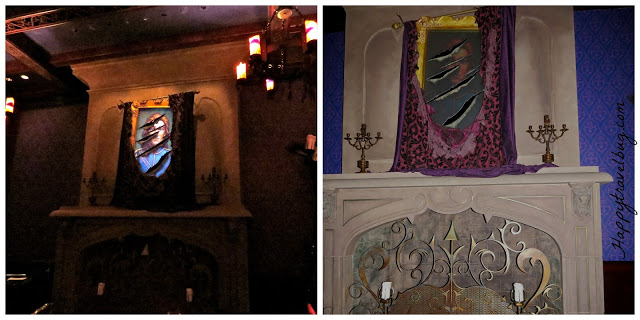 The most popular, and the one we dined in, was the West Wing.  It is VERY dark in this room.  I had to lighten the pics and I even used a flash with the second one.  I heard one lady with vision problems say that she couldn’t see her food.  But it you don’t have any issues with the dark, this is the coolest room.  That photo of the prince would quickly change to the Beast during a “storm”.  It sounds like thunder and flashes of lightening fill the room. 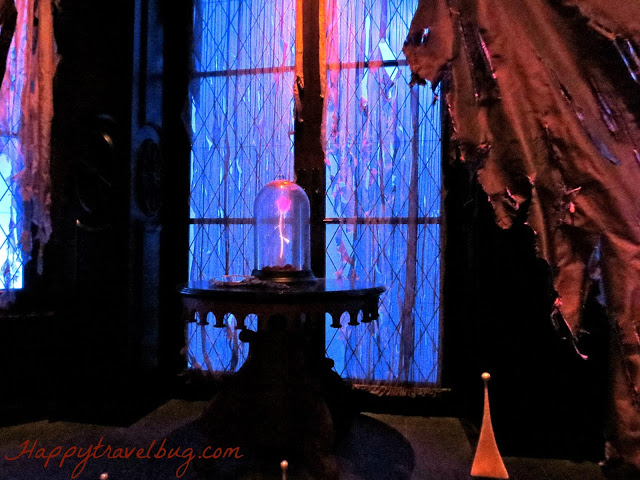 And the west wing holds the infamous rose!  Lots of people wanting pics with this, so if you don’t want that going on while you eat, pick a table not so close to the rose.  We really enjoyed our experience at Be Our Guest…the food, the atmosphere, the magic of it all.  I will try to get dinner reservations for the next Disney trip, but if I can’t, I will stand in line for lunch again.  I enjoyed it that much!

Check out the video to experience all the sounds in action.
For inspiration: Foodie Tuesday, Inspire Me Wednesday, Wanderfood Wednesday, Travel Tips Tuesday, Tell Me Tuesday, Friday Daydreamin’, Oh the Places I’ve Been, Works for me Wednesday and WIAW