Another day at Disney, another great restaurant! This time we chose a celebrity chef’s restaurant, Kouzzina by Cat Cora.  It is located at Disney’s Boardwalk hotel. 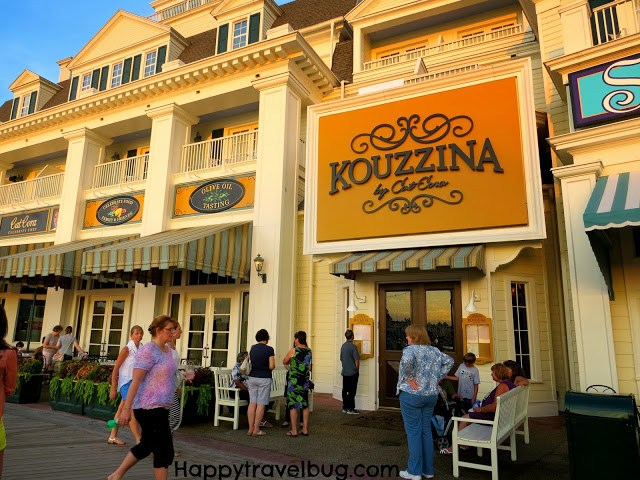 You met the Hoyt’s in my last post, but just in case you missed that, they are my in-laws who had driven in to meet me and the kids at Disney World.  We were all excited to try this “new to us” restaurant. 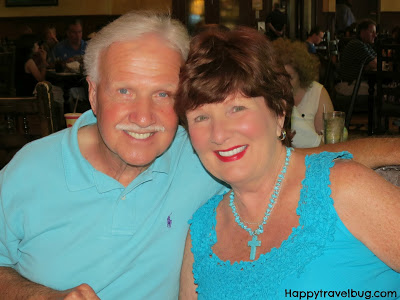 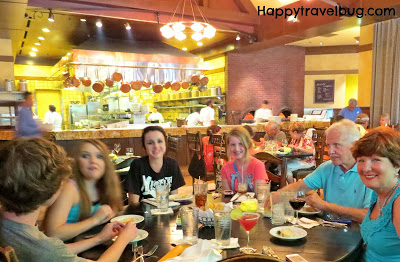 Besides the Hoyt’s, there was me and my two kids, and two of their cousins.  We were having a blast together! 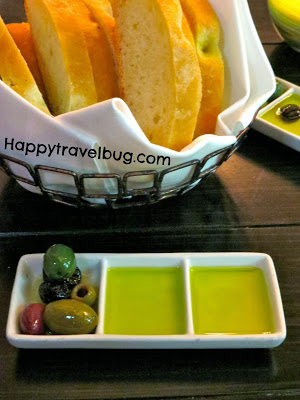 I LOVE olive oil!  Sometimes in the summer, my husband and I sit outside and eat bread with olive oil for dinner.  We include wine and some fruit for good measure. 😉   Greek olive oil is some of my favorite.  This is what came with the bread at Kouzzina. 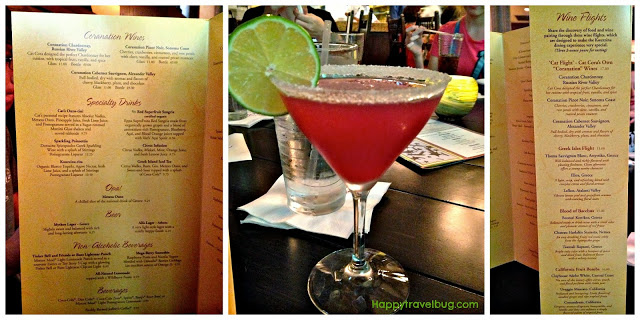 After checking out the drink menu, I decided to try Cat Cora’s personal recipe for an Ouzo-tini.  It had vodka, Ouzo, pineapple juice, lime juice and pomegranate served in a sugar rimmed glass.  I knew I had heard of Ouzo before, but didn’t remember that it was licorice flavored liquor until I tasted my drink.  There aren’t a lot of things I don’t like to eat, but licorice is one of them.  Darn!  Oh well, it wasn’t so bad that I couldn’t drink my cocktail.  😉
We started with six different spreads for the whole table to try.  They included olive tapenade, chickpea hummus, eggplant spread, Harissa yogurt, whipped feta and peppers, and tzatziki all served with warm pita bread.  I liked them all, but my favorites were the whipped feta & peppers and the olive tapenade.

The menu had so many things I wanted to try.  Lucky for me, they also had a sampler meal.  It included a lamb burger, greek style lasagna and cinnamon stewed chicken with orzo.  I keep trying lamb even though I have never liked it.  The burger was my least favorite of the three.   The greek style lasagna was delish!  So rich and creamy because of the greek cheese bechamel sauce.  And the meat was flavored with cinnamon.  I LOVE cinnamon!  So, of course, I enjoyed the cinnamon stewed chicken with orzo.  Overall I was very happy with my meal.

Funny enough, my son loves lamb and orders it whenever he can.  This was no exception, as he ordered the slow-cooked lamb shank with Gigantes beans.  I had never heard of these beans, but they were gigantic, so I decided that is how they got their name.  🙂   My son is a meat and carb lover.  So along with the lamb and beans he ordered the garlic rosemary mashed potatoes.  He was in meat and potato heaven. 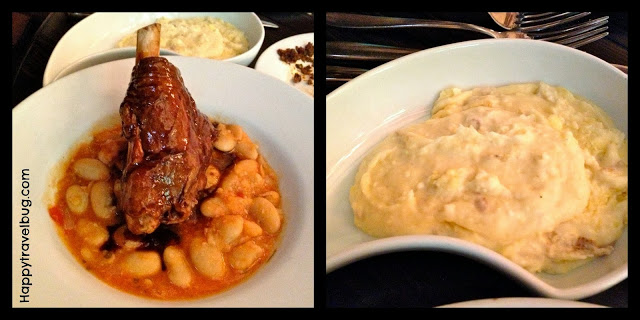 My daughter was in a meat and potato kind of mood as well.  She ordered the wood grilled steak with herb salsa, broccoli and potatoes.  It was delicious!  Especially that herb salsa, which I had never had with steak before.  She gobbled it up! 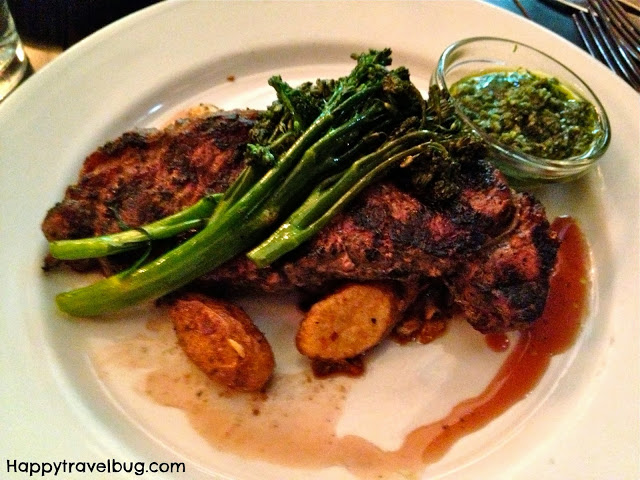 My mother-in-law ordered the oak-fired pork tenderloin served with smoked tomato relish, feta-zucchini spoon bread and green beans.  The pork was fork tender and had a fabulous flavor.  The green beans were also seasoned and cooked perfectly.  I thought she had the winner of the night. 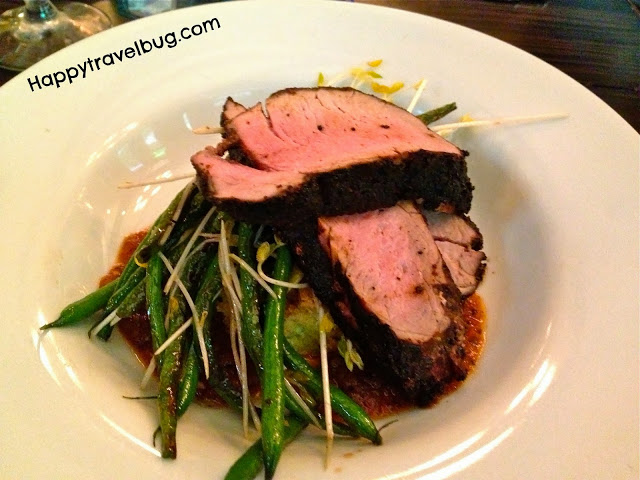 In case you wondered, yes, I do try most of the food on the table.  Most people are willing to share a bite so I can talk about it in the blog.  The only food I didn’t taste was my father-in-laws.  Mostly because his was pretty basic and I knew what that tasted like.  He asked the waitress for something lite and she created this grilled chicken salad for him.  It’s basically a Greek salad (tomatoes, feta, cucumbers and olives) with chicken added.  He enjoyed it. 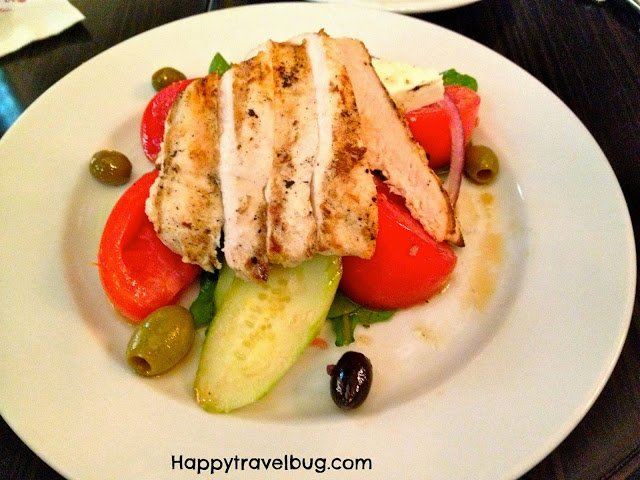 My niece got the full version of the Cinnamon-stewed chicken with tomatoes over herbed orzo pasta.  Remember, I had a sample size of it in my trio plate.  She liked it as much as I did. 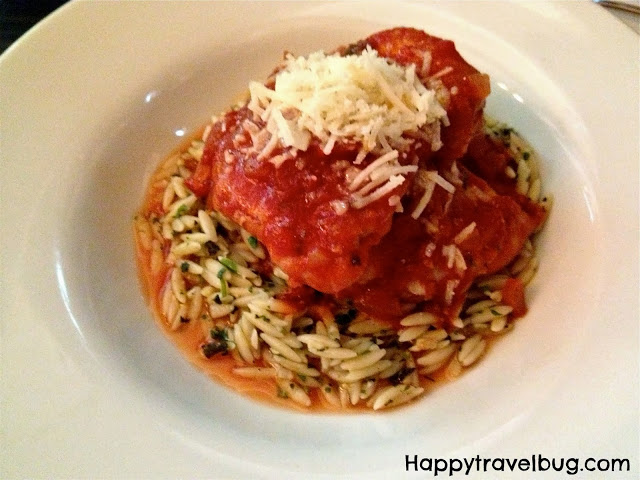 I almost forgot to mention my yummy side of sauteed brussels sprouts with a brown butter sauce, capers and cheese.  Oh my goodness!  Loved these!  Look at the brown goodness.  YUM! 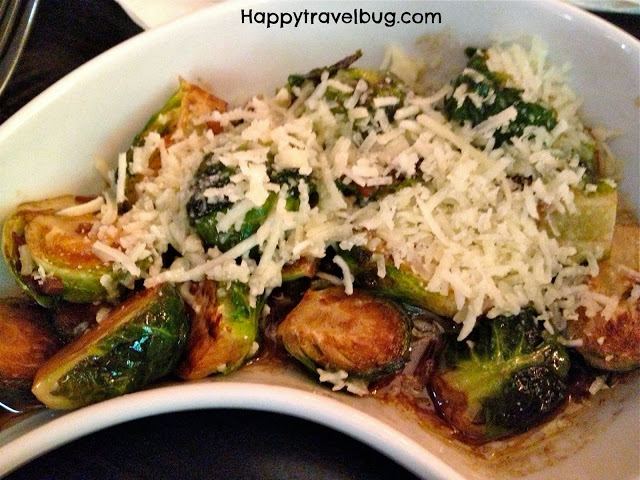 As usual, we felt the need for dessert.  I ordered a cup of coffee and we settled on three desserts for the table. 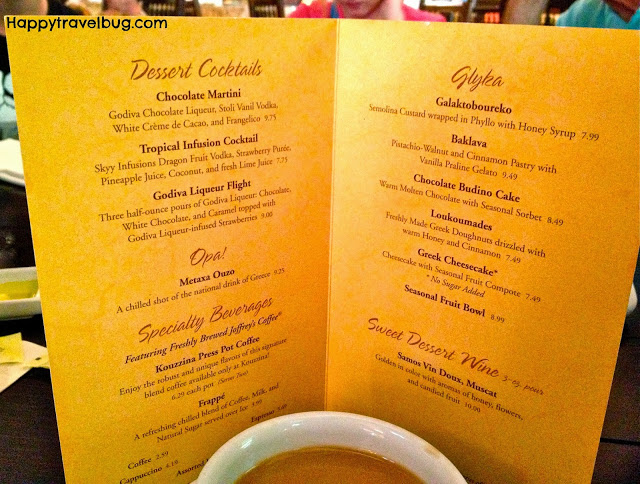 The girls (my daughter and two nieces) split some Loukoumades.  Better known as Greek doughnuts drizzled with honey and cinnamon.  They looked exactly liked little potatoes.  But they sure didn’t taste like potatoes.  They were soft and sweet, just like you would think they tasted.  A little sticky on the outside though because of the honey. 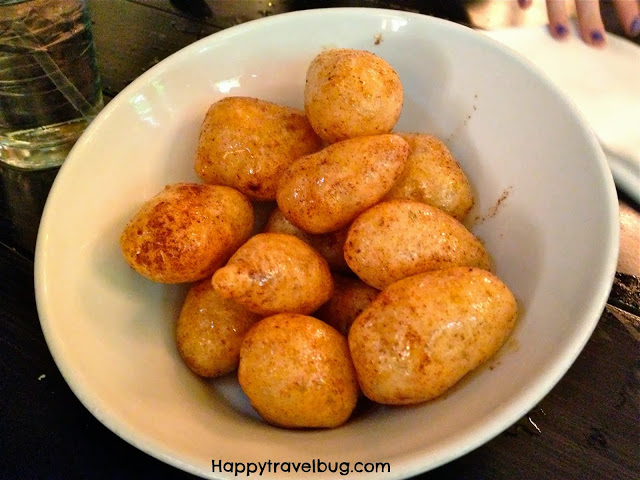 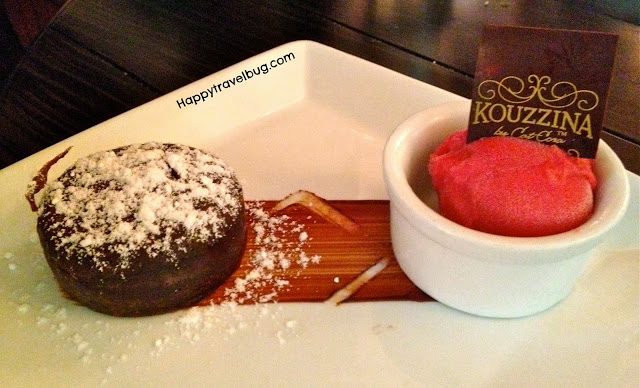 I saved the Galaktoboureko for last.  Not because of the funny name, but because of the awesome presentation.  That Kouzzina by Cat Cora is not part of the plate.  It is a design in cinnamon dust.  You can tell because I swiped my finger through it.  This dessert I shared with my mother-in-law.  Yes, I shared two desserts!  It is a semolina custard wrapped in phyllo and drizzled with honey.  Delish!  Cinnamon was a theme throughout the dinner.  I didn’t know it was so popular in Greek food. 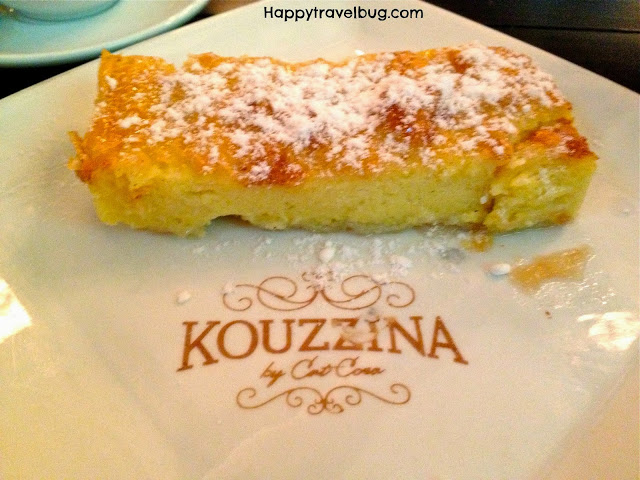 What a great time we had at Kouzzina.  I would definitely recommend it if you are heading to Disney World.  You do not have to have a ticket to the parks to eat there either, which is nice for the first day you arrive.  Especially if you arrive in the afternoon and don’t want to eat up one of your days of tickets just to go to dinner.  Check it out and let me know what you think.  Also check out this video below of our experience at Kouzzina.  Follow me on YouTube if you aren’t already.
Do you love olive oil for dipping?  If so, what is your favorite?  What country is it from?
For more food inspiration: What I Ate Wednesday, Travel Tips Tuesday, Wanderfood Wednesday & Foodie Tuesday